1/23/14 edit: The route on mapmyride.com has been put on private until we can pre-ride and update two changes on it. You can still see the zoomed out map here to get the general idea. Changes will probably make it shorter, but increase the percentage of dirt on it it, so Lob taketh and Lob giveth back. 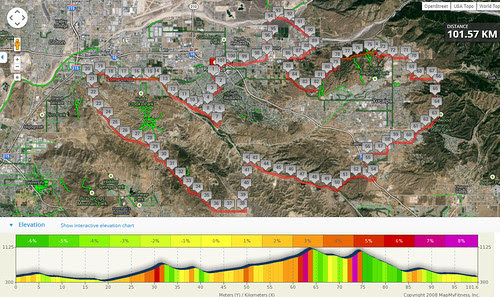 This just in: The tentative route is up and can be viewed here on map my ride. As you can see, the ride is on readily accessable roads and trails. All I've done is stitch them together in order to link some of the best riding in the area.

The actual route that will be used on the 15th is subject to change, although will be close to this published one. A team of tireless volunteers is pre-riding it constantly in order to make sure there are no access issues. There is some construction that the state water project is doing out by the Santa Ana River that we're particularly keeping our eyes on. This is 90-93 km (56-58 mile) into the ride as you're looking at the map. Would hate to have to cut that portion out, but it would be the only known problem we can't work around.

There is also a short hike around a gate and a bridge that we want to make sure is passable in the Riverside nature preserve. That is at the 31mile/50km mark as you leave San Timoteo Canyon Rd and go onto Woodhouse Rd. It's the only part that may feel sketchy, but I looked all over for private property/no trespass signs, and just came up w/ no hunting, no motorized vehicle, road not maintained by county. Sort of an invitation for an awesome ride if you ask me!

Take some time and get a feel for the route. Look at it in the satellite view so you can see what's dirt and what isn't. This is self-supported so we're not going to have route markers, sag vehicle, or sweepers planned. The map link will stay active, so you can use it in real-time on the ride as well with your personal electronic devices.

Everyone is encouraged to pre-ride any or all of it over the next few months to get an idea of what to expect.

Rain would be the only concern, as we'll have to figure out what to do if it really pours. A little rain is fine, even nice to be honest with you, but a downpour would really saturate the dirt and we would leave it quite rutted.