The Redlands Strada Rossa if a FANTASTIC and fun ride. Not too long, not too short. Not to hard, not too easy. Not too flat, not too hilly. Just all-around great and hard to improve upon. But we rose to the occasion, and put together a shorter but dirtier version, the Strada Sterrata.

"Dirt Roads" in Italian, the Strada Sterrata intended to link up as much dirt in the surrounding communities as possible, and create a mostly off-road route. In the end, it was 38 miles with 3,630 feet of climbing. Not too bad. Of that, only approximately six miles were on road. Most of that was leading out of and returning to downtown Redlands. You can see the map below, and link to it here.

We had 16 riders show up. A good mix of riders, similar to the Strada Rossa, but obviously more dirt focused. Everyone was encouraged to have 2" tires at a minimum, and to not ride it unless they had some sort of puncture protection. The fat tires were to get through the sandy sections 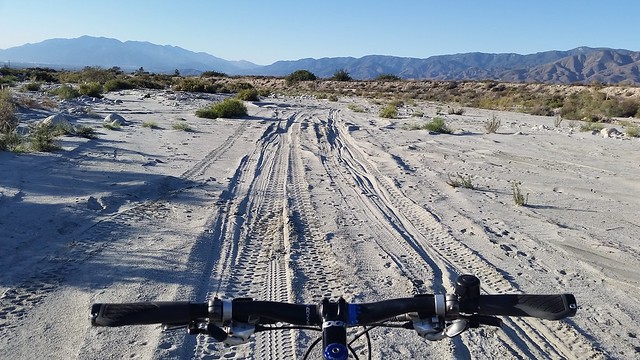 and the sealant was to make sure you weren't stopped by goatheads. Good advice for RSR as well, but not quite as imperative as it was for the RSS.

Different degrees of success with that.

In the end, two riders made the entire route, with six of us coming together at the end for pizza and beer at Gourmet Pizza in downtown Redlands. I think it was a great, but long day. Everyone seemed happy and positive about it, and are updating their family's calendars to make sure they come back for the longer, but less-rugged Strada Rossa on March 19th.

Hope to see you here in March!!!

Posted by cyclotourist at 7:15 PM